“Once you’ve wrestled, everything else in life is easy.” Dan Gable’s iconic quote is a powerful mantra that nearly every wrestler knows and loves. The obvious reason on why this simple statement has become so recognizable by wrestlers is that it has rung true in so many of our lives. We identify with it as both a point of pride and solidarity in our community. This isn’t exclusive to those that achieved Olympic gold but affects us all in just being a part of the sport, in being a wrestler. The impact the sport has made on us is unique with all different journeys along the way and its effect will always be lasting throughout our lives. 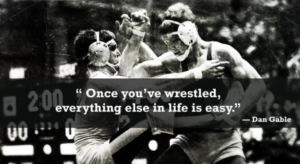 Another dynamic to this is the pride we take in others. This comes in many different forms that almost all of us can relate to. Sometimes it’s a head nod to the guy in the supermarket who has the same cauliflower ear that other people are looking at in horror. Other times it’s a t-shirt or jacket that makes you turn your head when you see the word “wrestling” under the team name. Maybe the one I like most is when you see someone achieve something professionally or athletically (other than wrestling) and hear, “oh yeah, that dude used to wrestle.”

Exactly that happened this week and Flo Wrestling, along with some other networks, put the story out about the University of Iowa football team. One of the starting offensive linemen was injured last weekend and a replacement, who will start this weekend, was put in. With that substitution in the lineup, all five of Iowa’s offensive lineman this week are Iowa natives that all placed in the top three at the high school state tournament. This was a really cool statistic that we were able to celebrate this week and evoke that spirit of pride in wrestling.

Now, as you’re reading this, I’m sure the first thing that comes to your mind is all the other wrestlers that were successful football players like Super Bowl Champions, Stephen Neal and Ray Lewis. From there, we would naturally look over at our buddy and say, “ya know, George Washington and Abraham Lincoln wrestled.” Even further, we would talk about military icons like George Patton and Norman Schwarzkopf, scientist Neil deGrasse Tyson, and entertainers Robin Williams, Ashton Kutcher, Tom Cruise, and Mario Lopez. Yes, “A.C. Slater” did, in fact, wrestle in high school in real life and was a California state placer. 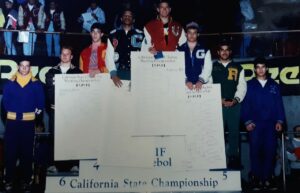 Before we get too deep into the litany of famous people that used to wrestle, let’s not lose focus on the topic at hand. Even though it can be entertaining to talk about all the celebrities that used to wrestle, the common bond we share in our experience in the sport is what makes this brotherhood and sisterhood so awesome. Whether the sport taught you how to be tough, how to face fear, how to make friends by putting yourself through torture by their side, or just how to lose 10 pounds in a week, we will always live by the, “once a wrestler, always a wrestler” mentality. It is a right of passage and badge of courage to call yourself a wrestler. Not everyone can do it and those who can will always hold themselves to a higher standard. It really is true. Once you’ve wrestled, everything else in life IS easy.